So after programming almost exclusively on Unix for the last 10 years, I recently found myself doing some windows desktop development.

And since a significant portion of those years were spent programming in python, I started playing around with IronPython as a way to explore the Windows API. One of the projects I build as a learning exercise is SimpleICM. 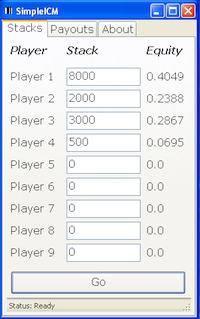 If you don’t play a lot of poker tournaments and study tournament theory then this probably doesn’t mean much. But professional poker tournament players need to do these calculations daily while reviewing their play and practicing making correct decisions etc. If you’re interested, check out this example of an equity calculation using SimpleICM.

It’s written using IronPython. You can download the application from here and you can get the source from the git repository.